I survived Eastercon! Actually, it’s still running even as I post this. It was fun, it was geeky; it was actually a lot less daft and a lot more cerebral than I expected. 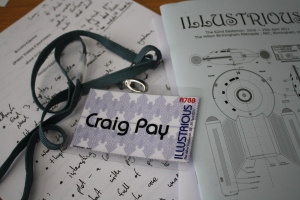 During the weekend I attended a writers workshop run by the T-Party Writing Group who supplied what I would describe as a ‘very thorough critique’ of our work (there were three other writers in my group). I saw some extremely sweaty brows! Luckily I seem to have acquired some pain-resistant scar tissue from the Manchester Spec Fic group – and I even volunteered to go first. This was great because I hate weak critiques. Yes, there’s That Word again ‘hate’. 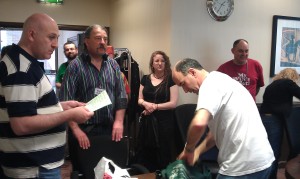 I also attended several panel discussions including ‘Is Facebook evil?’ and ‘SF catnip’ and ‘Is SF winning the culture war?’ I also dropped in to say ‘hi’ to Terry from Murky Depths. Will I be back next year? Well, probably not, but only because I heard someone say it’s down in London. Though I still want to go to that fancy dress ball…

There is one teeny tiny thing that’s bothering me though and it’s the whole literary-versus-SF thing. As I mentioned above, I attended a panel discussion on ‘Is SF winning the culture war?’… 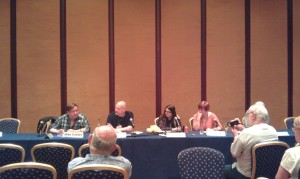 Yep, that’s Jon Courtenay Grimwood. This was a discussion about why there is a lack of recognition in the literary world regards the science fiction genre. Wow! A war? Apparently so. If you listen very carefully, you can hear the distinct sound of bullets pinging off cranially-mounted propellers and the swish of katana blades cutting through long scruffy beards. This is serious stuff.

Hmm. I have a bit of an issue with this. I’m not convinced.

Jon CG made a rather good point, right at the start, that if this is a war about money – i.e. who sells the most – then SF has already won. Because the literary markets make diddly compared to the insatiable appetite of the genre markets. Especially if you look at US sales. But, undeterred that the debate might have been wrapped up just a few minutes into the hour-and-a-half slot, the discussion continued. It boils down to this: ‘SF titles aren’t being listed for prizes such as the Man Booker and the Pulitzer and that’s not fair!’ The argument continued about how snobby literary people are and how SF might become watered down if everyone starts writing it.

Hmm. I put my hand up. I know I probably shouldn’t have done, and I know it’s completely out of character for me to voice my opinion, but I thought…well just this once. I said:

“It seems to me that the SF community actually enjoys the fight rather more than the prospect of winning the war. Because if we do win, we think everyone will be writing SF, watering it down and ruining the genre. Isn’t that, well, a bit jealous and guarded? Possibly just as snobby as the literary lot?”

Lots of people nodded enthusiastically. Some of them seemed to glare a bit. Ah well. The debate continued.

I can think of plenty of ‘literary’ authors who have written SF or borderline SF. I can think of a couple off the top of my head (Margaret Atwood & Kazuo Ishiguro) and I suspect this bloke I know can probably list a dozen more without even having to think hard. I have an analogous story, and it goes like this:

Once upon a time there was a bully in a school. But this bully didn’t conform to normal stereotypes because had a long scruffy beard, he was actually quite brainy and he liked to read books with Very Big Words. There was also a geek in the school. The geek loved conforming to type, so he liked computer games, comics, role-playing games and books with small words about big busted women with lazors. The bully didn’t let the geek join the book reading club.

The bully and the geek grew up.

The bully got a job. The geek got a job in IT. They both started writing Serious Stuff. One day they met up and the geek said: “You know, I’m still pissed about the whole school book club thing!” The bully said: “Sorry, I don’t remember that.”

I wonder if the SF community is just a little over sensitive about the whole SF versus literary thing. Is there a war at all? Gah! Incoming friendly fire!!

2 thoughts on “So that was Eastercon…”