Yeah, I know you’ve heard it all before: dialogue “makes yours characters come alive!” and whilst I happen to agree with that statement, I think throwing around writing advice like that is about as useful as spitting out random Nietzsche quotes. Without context, it’s meaningless. 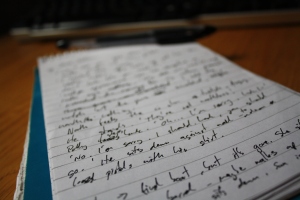 So let me get started by stating quite clearly . . .

I am not an expert in writing dialogue.

There, disclaimer done. But I reckon I know a few cheap tricks. Whether this makes me a good writer or just a bit of a conman, I don’t know but it works for me. So here we go with 10 cheap dialogue tricks . . .

I’m sure I once read that ‘most good stories’ are:

I can’t remember where I read this. In fact, I’m not sure I read it at all. Perhaps I just dreamt it? Or maybe I’m just making it up for this blog post. You decide.

Anyway, I’m not advocating line counting and spreadsheets so you can fret and worry that, “Damn! I only have 23.7% dialogue with over 59% introspection and my action percentile is screwed!” Be sensible now. This is just a guide which seems to work for me. It may or may not work for you. I could be talking nonsense.

If I look back to discover I’ve written two or three pages of solid narrative I sometimes pause for a moment to consider whether I should add some dialogue or replace some of the narrative with dialogue. A lot of the time I just shrug and carry on. But sometimes I realise I’ve skipped a perfect opportunity for dialogue and I rewrite a paragraph or two.

This isn’t a hard rule and it tends to average out by the end of a novel or a short story. I might have a chapter with a single character on their own and there’s very little opportunity for dialogue, then the next chapter is centred around a heated exchange between two characters and it’s full of dialogue.

Learn the rules and how to punctuate. It’s easy and you look a bit daft if you keep getting it wrong. A standard line of dialogue works like this . . .

If you tag before, don’t forget the full stop at the end of your dialogue. Those little speech marks haven’t changed the basic rule of punctuation, which is . . .

Bob said or said Bob? Personally I use Bob said. I think it’s more contemporary and would be more consistent with Bob said / I said rather than said Bob / said I. You’d obviously never say said I so you’d be mixing said Bob with I said. If you’re going to use said Bob make sure you capitalise correctly . . .

Be careful when you use a question mark or exclamation mark at the end of your dialogue. If you follow your dialogue with a tag your ? or ! acts like a comma, and you need a lower case tag like this . . .

But if you follow your dialogue question mark or exclamation mark with a beat then your ? or ! acts like a full stop, and you need to upper case like this . . .

‘You sure?’ Scratching his head, Bob looked unsure.

Another good example is using a description instead of a name. Say you’ve introduced a character as just ‘the old man’. Your tags work like this . . .

‘What?’ The old man shrugged.

I’m not sure this matters as long as you’re consistent. Yeah I guess they tend to use double speech marks in the US and single in the UK. Check the market you’re sending your work to and follow their guidelines. I use ‘single quotes’.

‘How are you?’ Jane crooned.

People do not growl/howl/whine/whimper/sing words. Try it the next time you’re standing at the checkout in Tesco, then call me from the secure unit to tell me how it went. This is called said bookism. Early 1900s hack fiction was full of this stuff. It’s naff.

Consider dropping some (or all) of the -ly adverbs on your speaker tags . . .

‘Yeah . . . what were we talking about again?’ Bob said confusedly.

I mentioned beats earlier on. Beats are classy. They identify the speaker without needing a tag, allowing you to drop some of your tags, so instead of . . .

Note that the comma has changed to a full stop. But stop worrying whether you have too many tags. Too many tags can feel a little over the top but they’re pretty much invisible. Maybe use a few beats instead? Job done.

You can beat before, in the middle of, or after your dialogue . . .

‘I just don’t believe it!’ She ran her fingers through her hair.

This is a bit over the top. Too many beats and your characters will be twitching all over the place.

In the real world people are crap at dialogue. Next time you’re out somewhere just listen to two people talking to each other. They interrupt, they don’t finish sentences, they . . .

Sure, I tried this out myself. I sat in a  doctor’s surgery and—

No, I was just saying—well, it’s  wonder people understand each other at all . . .

Now, be careful here. Experiment a teeny tiny bit. If you smash up all your dialogue like this your work might be realistic but unreadable. You need to find a balance between realism and sanity.

You can trail away a sentence with an ellipsis like this . . .

Or insert a pause into a sentence using an ellipsis like this . . .

You can use an em dash for an interruption like this . . .

You can also use a dash on the same line of dialogue to show—well you know when people change direction in their own sentence? Like this . . .

‘Yeah I was thinking—hang on, I’ve left the oven on!’

Now this whole ellipsis/dash thing seems to vary from author to author, publisher to publisher. Some authors/publishers seem to use ellipses for interruptions and dashes for trailing off. This is how I do it.

Now there could well be people reading this post who are going to think this next point is aimed specifically at them.

Lots of people do it. All the time.

But real people don’t use names in dialogue unless they’re being creepy, patronising or they’re otherwise making a point of using someone’s name when they speak . . .

Again, try it next time you speak to someone. Try it with the girl on the checkout in Tesco or perhaps the big guy on the door at your local nightclub. But don’t blame me if she calls you a perve and calls security or if he gives you a thump and chucks you out into the street.

Don’t use names to identify the other speaker.

When people talk they have an agenda. They want to tell their side of the story and they quite probably don’t give a rat’s ass about what the other person has to say. They try to change the subject and derail the conversation. They’re evasive, they omit the truth and they sometimes even lie.

Oh, is this just me?

But think about it. You, the author, might have a point to get across by making your characters talk to each other but your characters probably have something else in mind. There’s nothing more boring than a conversation like this . . .

For a moment they stared at each other. A tumble-weed blew across the set.

Jane said, ‘Nothing, no nothing.’

‘You did the eyes thing—’

‘No it’s fine. Now these reports—’

Bob said, ‘You said the other week you don’t mind veggies?’

This doesn’t have to devolve into an argument. Perhaps Jane just knows that Bob will drop his new regime the following week. Perhaps she’s just eaten her first burger after ten years on the greens.

‘So,’ Agent Bob said, ‘I only load five bullets into my six cylinder revolver, leaving one chamber empty. I leave the hammer over the empty chamber so I don’t shoot myself if I accidentally pull back the hammer, like snagging it on my clothing.’

Agent Jane said, ‘Indeed. I apply a similar rule to my automatic pistol, of course.’

‘When I pull back the slide on my automatic,’ Agent Jane continued, ‘a round is loaded into the chamber. If the safety catch is off and I snagged the hammer, the gun could fire.’

Since when do two people who know a topic this well talk like this to each other? Also avoid exposition like this . . .

‘So,’ Agent Bob said, ‘the politician was killed by the girl?’

‘Yes,’ Agent Jane said. ‘Turns out he blackmailed her father years ago, driving him to suicide. She’s been tracking him down all this time—’

‘Ah, that explains those newspaper clippings two chapters ago.’

‘But,’ Agent Bob said, ‘I still don’t explain how she got inside.’

That’s it! Go scribble some stuff. You shouldn’t be spending all your time reading other people’s blogs.