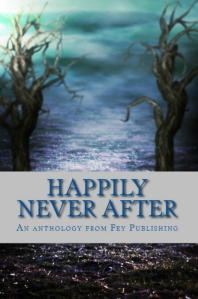 Very happy to announce that my short story Glass Fifty-Three has been published with the Happily Never After anthology from Fey Publishing. It’s available on Smashwords as well as Kindle from Amazon.co.uk and Amazon.com. It’s also sitting pretty over at Goodreads.

Glass Fifty-Three is a standalone story set in a dystopian future and based around the reworking of a rather well-known fairy tale. There’s a gun, a flying car and a talking hoover. Fellow students and lecturers from the 2010-2013 Creative Writing MA might recognise this story from one of the workshops.

So check out the anthology and let me know what you think. Here’s the blurb . . .

Happily ever after is a thing of the past.

As long as there are children in the world, there will be fairy tales.

Since the dawn of time, parents have passed down legends and stories to their children, and parents will probably continue telling these stories until the end of time.

Of course, the fairy tales of tomorrow won’t be the same stories of today. What will these tales of the future be like?

Well, there will be dragons, though they may be robotic dragons created to capture a “princess” in a war-torn world. There will obviously be queens, witches, and frog princes, though not like any you’ve seen before. And of course, as with any fairy tale, there will be magic and mayhem galore.

Forget happily ever after… This is Happily Never After – where dystopian science fiction meets the fairy tales of days gone by.